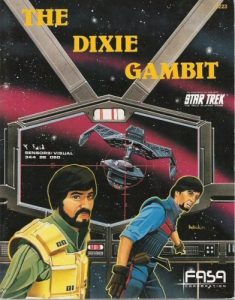 “OPERATION DIXIE… These files describe the Federation’s most ambitious Intelligence mission as “Lost-Presumed Destroyed,” Three vessels, betrayed to the Klingons one by one, have been swallowed up behind the Imperial frontier, never to return. Now the last of Dixie’s ships has been spotted, owned by a shipping company In the Triangle, far from the place where it had presumably been destroyed. A crew of Intelligence Operatives has been given the crucial mission of discovering the fate of Operation Dixie and recovering the important data lost when the expedition failed. But in the Triangle, things aren’t always what they seem, and this is only the first move in a dangerous game of thrust and counterthrust … a move that leads to The Dixie Gambit.”