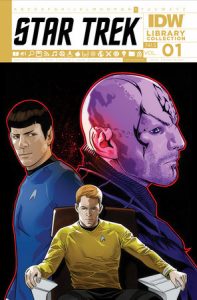 Delve into the history of over 400 issues of IDW’s Star Trek comics! Discover series you may have missed or revisit some old favorites from The Original Series, The Next Generation, Kelvin Timeline, and more!

Starting with the Kelvin Timeline and the prequel that led into the 2009 Star Trek movie, Countdown details the origin of the mysterious Nero, the Romulan that ultimately threatened the survival of the entire universe! Then, in Nero, find out what he did in those cold, dark, lonely years spent waiting for his nemesis to arrive. Both brought to you by Roberto Orci, Alex Kurztman, Mike Johnson, Tim Jones, and David Messina.

In Spock: Reflections, the follow-up to Countdown, discover what could drive a man to abandon all he knows and go live with the Federation’s sworn enemy, his real motivations, and what brought him to this place in his life. A Vulcan on Romulus? Absurd! Or is it? By Scott Tipton, David Tipton, and David Messina.

The Star Trek Library Collection is a comprehensive line of books that will collect every comic series published by IDW!