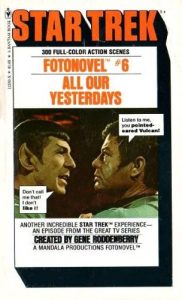 Captain Kirk, Spock and Doctor McCoy transport to the surface of the planet Sarpeidon, to warn the inhabitants that their sun (the star Beta Niobe) is about to become a supernova. All three members of the landing party are surprised to find there are no inhabitants of Sarpeidon remaining. In a Sarpeidon library, the team encounter a librarian named Mr. Atoz and several of his replicas.