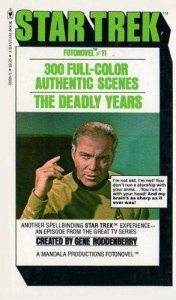 The Enterprise discovers a colony full of rapidly-aging scientists. Whatever caused the rapid aging afflicts the ship´s landing party as well. Kirk, Spock, McCoy and Scott are shocked to discover they are aging decades each day and will soon die unless a cure can be found. The unaffected Chekov may be their only hope for survival.

“Captain’s log, stardate 3478.2. On a routine mission to resupply the experimental colony at Gamma Hydra IV, we discovered a most unusual phenomenon. Of the six members of the colony, none of whom were over thirty, we found four had died and two were dying … of old age.”