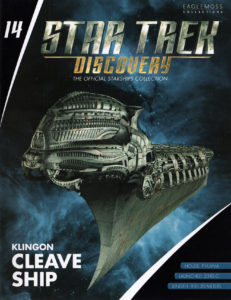 At the start of the Federation-Klingon War in 2256, the only Klingon ships to have cloaking technology were those commanded by T’Kuvma. One such vessel was the Klingon cleave ship – a massive instrument of death with a vast cutting blade running along its length. While cloaked, the ship was able to approach the Federation starship U.S.S. Europa undetected, before plowing into its hull with devastating results. With no other means to retaliate, the Europa overloaded its own antimatter containment field, destroying itself and the cleave ship along with it.

The Klingon cleave ship is die-cast and hand-painted with intricate detail using references from CBS Studios’s own archives of designs and CG models. It comes with its own display stand and an exclusive collector’s magazine featuring a full profile of the starship.