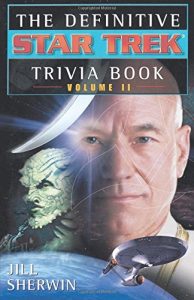 By popular demand…a second book of Star Trek trivia questions from the greatest science fiction phenomenon of all time! The Definitive Star Trek Trivia Book, Volume II contains more than two thousand new questions, quizzes, and brainteasers on topics ranging from “Personnel” to “Strategies and Tactics” to Star Trek Romances,” Test yourself and your friends — Who among you is the ultimate Star Trek expert?

1) Which episode begins with a giant hand grabbing the U.S.S. Enterprise?

4) What do the following officers have in common?

5) The Klingon who steers the mythological Barge of the Dead is named 6) Match each shuttlecraft to its “parent” ship:
A. Chaffee
B. Cochrane
C. Columbus
D. Copernicus
E. Curie