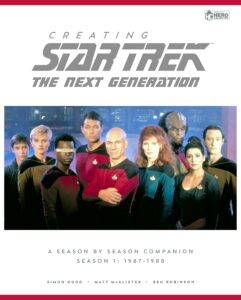 A brand-new Star Trek book series will delve into every episode of Star Trek: The Next Generation, all 178 installments, season by season.

Hero Collector is making it so, introducing a series of seven volumes that will cover each season of The Next Generation, with in-depth looks at all 178 episodes. Each volume serves as a standalone, building to a valuable personal collection. Author Matt McAllister shines a light on the showrunners’ ambitions, the casting, the writing, the directing, the actors’ thoughts and approaches, and more, revealing how The Next Generation began – and blossomed into one of the best-loved science-fiction television series of all time.

The initial volume of Creating Star Trek: The Next Generation focuses on season 1, from the creation of the show to the early adventures of Captain Jean-Luc Picard and crew to how Patrick Stewart, Jonathan Frakes, Brent Spiner, Marina Sirtis, LeVar Burton, Gates McFadden, Michael Dorn, Wil Wheaton, and Denise Crosby became the new faces of Star Trek – and revitalized the franchise.