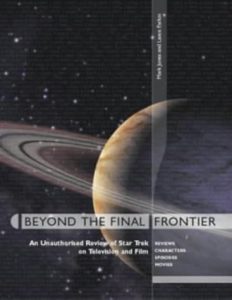 The final frontier is vast…

For the first time there is one book that encompasses the whole Trek Universe on screen: over six hundred episodes from the five television series, plus the animated show and all ten movies.

Here is a complete, unofficial episode guide packed with facts and behind the scenes information. Beyond the Final Frontier is a fully-indexed, critical appreciation and includes a glossary for those who can’t tell their Alpha Quadrant from their wormholes. This single volume includes entries for each television episode, lists guest stars, key production staff, transmission dates and a short plot overview. There’s something for everyone, from the die-hard fan to someone who’s only just discovered the worlds of Star Trek.

Including details up to the second series of Enterprise and the tenth film, Nemesis, this is one reference book no science fiction viewer can do without.