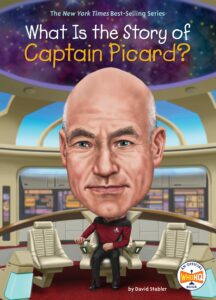 Climb aboard the starship USS Enterprise and learn how Jean-Luc Picard became one of the most beloved Starfleet members in the Star Trek universe.

Star Trek stands as one of the most popular science-fiction series of all time, and Captain Picard is one of its fan-favorite characters thanks to his inspiring quotes and brilliant leadership. As the captain of the starship USS Enterprise, Picard has taken viewers with him on adventures through space for decades. Now, young fans can learn even more about the famous character, including details about his obsessions with Earl Grey tea and Shakespeare.

From appearances in live-action and animated television shows, a series of films, comics, video games, and more, Jean-Luc Picard is an established icon in the Star Trek universe and a beloved character across pop-culture channels.

Author David Stabler takes readers aboard Starfleet starships as Picard adventures through space, defeats great evils, and inspires hope in us all to believe that “things are only impossible until they’re not.” 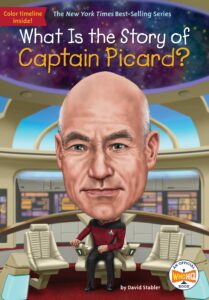