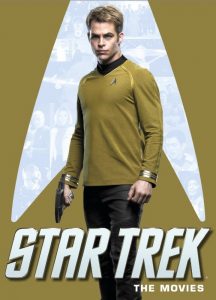 The making of the Star Trek movies, as told by the cast and crew!

As Star Trek Beyond heads into movie theaters and the Star Trek franchise celebrates its 50th Anniversary, this jam-packed volume celebrates Star Trek on the silver screen in all its incarnations – from the J.J. Abrams-directed Star Trek and Into Darkness to the classic The Wrath of Khan and The Undiscovered Country – with a stellar array of big name cast and crew interviews.