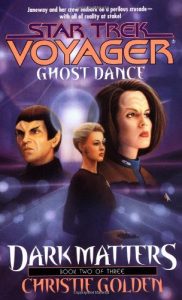 Scientific theory holds that ninety percent of all matter in the universe is “dark matter,” unable to be detected by ordinary means. The gravitational force of that mysterious material ensures the continuance of all reality, but now a cosmic conspiracy plans to use excess dark matter to bring about the death of the universe.

While Chakotay and Paris are lost in a mysterious shadow dimension, Captain Janeway and the remainder of her crew struggle to contain the deadly dark matter wreaking havoc on the ship — and deep in space. But malevolent forces are working against the Starship Voyager, and they have seduced the Romulan Empire to their cause!