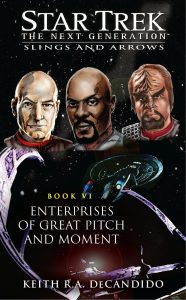 A new Federation President has been elected, and his first order of business is to attempt to restore the alliance with the Klingon Empire. To that end, he sends Captain Picard to Deep Space 9, in the hopes that Picard’s relationship with Chancellor Gowron might lead to a normalization of relations.

At first, things go well, as Gowron agrees to meet with Picard and Captain Sisko of DS9 on a neutral planet — but when their runabout is shot down, it’s up to Commanders Worf and Data to find out the truth before their captains are killed!