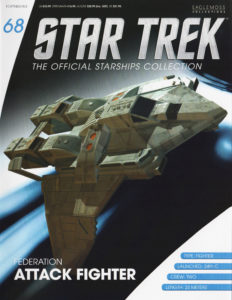 The Federation Attack Fighter was used by the during their insurrection against the Cardassian Union. Prior to 2370, these ships were civilian Federation support couriers not used by Starfleet. They were able to carry a range of weapons at their disposal, such as torpedoes, pulse cannons, and disruptors. Large numbers of these ships were used by Starfleet in the Dominion War.