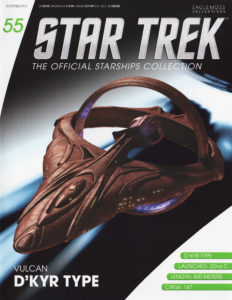 The Vulcan D’Kyr-Type was the largest and most powerful ship in the Vulcan fleet during the 22nd century. At approximately 600 meters in length, it was most commonly referred to as a combat cruiser and had a standard operating crew of 147.