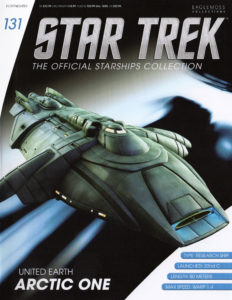 The United Earth Arctic One was seen in the Star Trek: Enterprise episode ‘Regeneration’. This Arctic One-type transport was in service in the mid-22nd century. During an exploration of Earth’s Arctic Circle, its crew discovered a crash-landed Borg vessel and were assimilated by drones who took command of the ship and tried to pilot it back to the Delta Quadrant.

This highly detailed United Earth Arctic One has been cast in specially formulated metallic resin and painted by hand. The Arctic One was a specialized research ship used in extreme cold-weather environments. In appearance, the 80-meter long vessel resembled a huge snowmobile and was fitted with three landing skis, which allowed it to set down on snowy ground.

Inside the magazine, the tech and design of this United Earth ship, plus writer Mike Sussman on ‘Regeneration’, plus creating the Borg costumes.