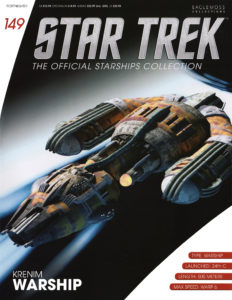 The Krenim Warship is a powerful vessel used in the 2370s by an aggressive Delta Quadrant civilization known as the Krenim Imperium. When seen from the rear, the Krenim Warship had a very distinctive U-shaped section for its warp and impulse propulsion systems. It was armed with chroniton-based weaponry to repel any ships that strayed into their territory, making them very dangerous to encounter. The designer Rick Sternbach tinkered with a few shapes before hitting on the look for the Krenim warship.