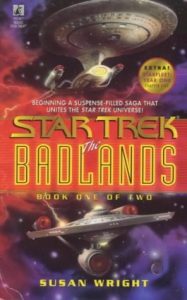 Located dangerously near the Cardassian border, the unstable region of space known as the Badlands has long been a hazard to interstellar navigation, characterized by violent plasma storms and other even stranger phenomena. Many starships have faced destruction there, including at least two incarnations of the Starship Enterprise….

James T. Kirk braves the perils of the Badlands to confront a Romulan Bird of Prey that has entered Federation space in pursuit of a fleeing smuggler. But trespassing Romulans may be the least of Kirk’s problems when the mysterious forces at work in the Badlands threaten both his ship and his crew!

A generation later, Jean-Luc Picard faces the same phantom menace when he commands his Enterprise into the Badlands on a mission vital to Federation-Cardassian relations. With Will Riker’s life on the line, and the entire ship in jeopardy, it’s up to Lieutenant Commander Data to determine the true nature of the Badlands’ hidden danger!