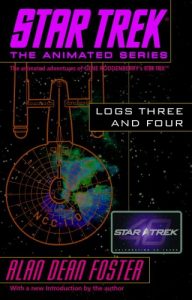 “SPACE. THE FINAL FRONTIER . . . These are the voyages of the Starship Enterprise.” Celebrate the fortieth anniversary of Star Trek with the original mission logs chronicling some of the crew’s most bizarre missions and strangest encounters with alien races across the galaxy . . . where no man has gone before.

Once Upon a Planet
Ready for a holiday, the Enterprise crew returns to the planet of fantasies expressly designed to make every wish come true. But the resort has become a mad dream world where nightmares are hideously real.

Mudd’s Passion
When space scoundrel Harry Mudd is arrested and brought aboard the Enterprise, he subjects the crew to a liquid-crystal love potion–with devastating results.

The Magicks of Megas-tu
After penetrating the very heart of the galaxy, Kirk and his crew confront a strange half-man, half-goat creature, who introduces the Enterprise to a fantastic world of good . . . and evil.

The Terratin Incident
A garbled distress signal leads the Enterprise to certain doom in a fiery mass of radiant particles–as all living matter begins to shrink to nothingness, including Kirk and his crew.

Time Trap
A Klingon attack on the Enterprise causes both ships to disappear into the Delta Triangle, a dead-end time warp of lost ships. Escape is impossible– unless sworn enemies Kor, the Klingon leader, and Kirk work together.

More Tribbles, More Troubles
After saving a Federation scout ship from Klingon attack, Kirk also rescues Cyrano Jones and a pile of tribbles. Jones insists that these tribbles don’t multiply–but they do grow bigger, and bigger, and bigger.