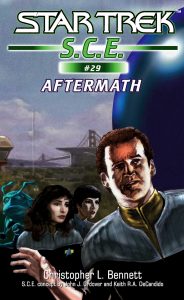 The U.S.S. da Vinci is at last ready to resume its mission after the catastrophic events of Wildfire — but before the ship can even leave Spacedock, a mysterious alien vessel appears out of nowhere in San Francisco. With the aid of Captain Montgomery Scott and former Starship Enterprise and Deep Space Nine engineer Miles O’Brien, the S.C.E. must investigate the alien vessel and learn if this is an attack, a first contact — or something worse….

What they find may land the Federation in the midst of an interdimensional war, as Commander Sonya Gomez works with Starfleet legends from two generations to untie the secrets of the alien ship before it’s too late!