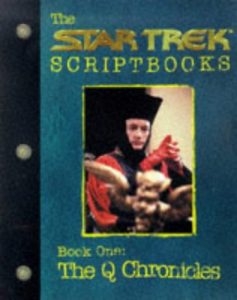 Of all the myriad beings who inhabit our galaxy, none are as enigmatic (and as entertaining) as the omnipotent cosmic trickster who calls himself Q. Since the very beginning of Star Trek: The Next Generation he has confounded Starfleet captains from one end of the Milky Way to another. Sometimes a playful mischief maker, sometimes a deadly threat to all humanity, Q is nothing if not unpredictable.

Starfleet has maintained an extensive record of all Q’s bizarre manifestations, and now so can you. Here, painstakingly compiled, are the original scripts for each of Q’s unforgettable encounters with the Federation.

From his memorable first appearance on the Starship Enterprise to his single visit to Deep Space Nine and his ongoing flirtations with Captain Kathryn Janeway of the Starship Voyager, The Q Chronicles provides authentic transcripts of over a decade’s worth of quintessential fun and games.