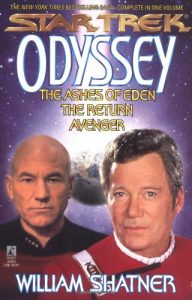 For three full decades, on television and on film, actor William Shatner has portrayed one of the most dynamic heroes of science fiction: James Tiberius Kirk, captain of the Starship Enterprise. Now Shatner brings his distinctive blend of talents as actor, writer, director, and producer to reveal the saga of Kirk’s second life in three complete novels. “The Ashes of Eden” His voyages over, facing retirement at last, Kirk encounters a beautiful and mysterious woman who lures him into a search for new adventure– and his lost youth! “The Return” The Borg and the Romulan Empire have joined forces against the Federation, and their ultimate weapon is none other than James T. Kirk, resurrected by alien science to destroy the Borg’s most formidable enemy: Jean-Luc Picard. “Avenger” Kirk and Spock, together again, must join forces to save a new generation from an awesome menace unleashed by a ruthless interplanetary conspiracy. And the only man who might be able to stop them is the captain of the Starship Enterprise. Three powerful stories that only William Shatner could tell.