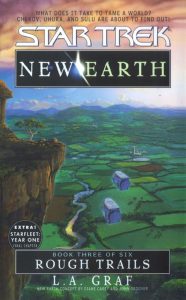 Captain Kirk’s latest voyage has brought him far into the final frontier. His new mission: to help a determined band of pioneers colonize a harsh and unforgiving world, defend the vulnerable settlers from the constant threat of alien invasion, and protect the planet’s unique and precious resources for the sake of the entire Federation Rough Trails Months after their departure from Earth, the struggling colonists have barely established a precarious toehold on Belle Terre, a ravaged world still recovering from a catastrophic planetary disaster. Fierce cyclones, storms, landslides, and flash floods make the survival itself a never-ending challenge. While Captain Kirk and the “Starship Enterprise(TM) ” patrol the sector, on guard against predatory aliens and greedy space pirates, officers Chekov, Uhura, and Sulu stay behind to assist the hapless settlers in their desperate battle to put down roots in the turbulent soil of and angry planet. But the imperiled colonist are fractious and intensely individualistic group, not inclined to take orders or direction from their Starfleet guardians. Chekov and the others find their ingenuity and diplomatic skills tested to their limits — to save a people who don’t want their help!