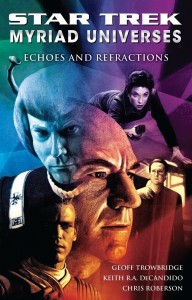 It’s been said that for any event, there are an infinite number of possible outcomes. Our choices determine which outcome will follow, and therefore all possibilities that could happen do happen across countless alternate realities. In these divergent realms, known history is bent, like white light through a prism — broken into a boundless spectrum of what-might-have-beens. But in those myriad universes, what might have been…is what actually happened.

THE CHIMES AT MIDNIGHT: In a continuum where Spock died during childhood, an Andorian named Thelin became Captain Kirk’s stalwart friend and first officer. But at the moment of Khan’s final defeat, history takes an even stranger turn, and the emerging potential of Project Genesis is revealed as the galaxy’s greatest hope…and its most ominous threat.

A GUTTED WORLD: Terrorist Kira Nerys — from a Bajor that was never liberated — may hold the key to winning a war that has engulfed half the galaxy. But with the Romulans and the Klingons at each other’s throats, and the Federation pulled into the conflict, even victory may not bring salvation.

BRAVE NEW WORLD: Dr. Noonien Soong’s dream has been realized: androids are now woven inextricably into the fabric of the Federation, revolutionizing Starfleet and transforming the quality of humanoid life. But when Soong’s long-missing breakthrough creation, Data, mysteriously resurfaces, civilization reaches a crossroads that could lead to a bright new future, or to ruin.