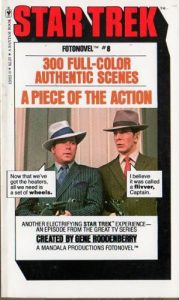 Returning to a planet last visited by an Earth ship 100 years earlier, the Enterprise finds a planet that has based its culture on the Chicago gangsters of the 1920s. The USS Enterprise arrives at Sigma Iotia II. This remote planet had been visited by the Horizon in 2168, before the establishment of the non-interference directive. The Horizon was lost shortly after leaving Sigma Iotia II and Starfleet only managed to receive her radio reports nearly a century later, as the Horizon was only equipped with conventional radio.