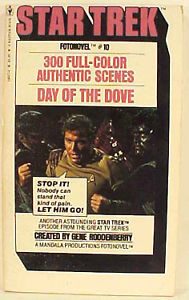 An extremely powerful non-corporeal being brings the Enterprise and a Klingon ship in direct conflict with one another.

Responding to a distress call from Beta XII-A, a landing party from the USS Enterprise beams down to the planet. The team consists of Captain Kirk, Doctor McCoy, Ensign Chekov, and Lieutenant Johnson, a security officer. They find no evidence of a colony nor any indication that one was attacked. Dr. McCoy reminds Kirk that whoever sent the distress call claimed they were under attack by an unidentified starship. From the bridge of the orbiting Enterprise, Spock hails the captain and reports that a Klingon battle cruiser is approaching. Although Kirk authorizes the Vulcan to defend the Starfleet ship, Lieutenant Sulu determines that the Klingon vessel is totally disabled, but the Enterprise never fired upon it. A team of Klingons beams to the planet and approaches the Starfleet officers. Commander Kang, the leader of the team, believes that Kirk is responsible for the damage to his ship and for killing four hundred members of his crew. As a result, the Klingon claims the Enterprise as his own and takes the Enterprise crew as prisoners of the Klingons. Both men are unaware of a strange anomaly nearby.