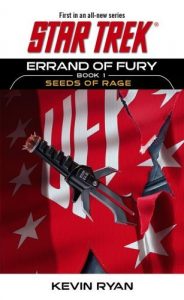 Following the harrowing events of the Errand of Vengeance trilogy, tensions between the Federation and the Klingon Empire are the highest they’ve been since the Battle of Donatu V twenty-five years earlier. Even as Federation Ambassador Robert Fox engages in tense negotiations with the Klingon ambassador to maintain the peace, Captain James T. Kirk of the Starship Enterprise sees his vessel refit from a ship of exploration into a ship of war. The coming conflict will take its toll on many personal lives as well…

Leslie Parrish: The security supervisor is stunned to learn that she is pregnant by her recently killed lover, Jon Anderson — and that Anderson was, in fact, a Klingon spy, surgically altered to pass as human.

Karel: Brother of the Klingon agent posing as Anderson, and responsible for his death, Captain Koloth’s new first officer faces a crisis of faith as he sees the Klingon Empire falling into dishonorable ruin.

Michael Fuller: Father of Enterprise security supervisor Sam Fuller, who was killed in a battle with the Klingons, his son’s death reminds him of Donatu V, of which he was one of the few survivors. Has Fuller reenlisted in Starfleet and joined the Enterprise security team out of loyalty — or vengeance?