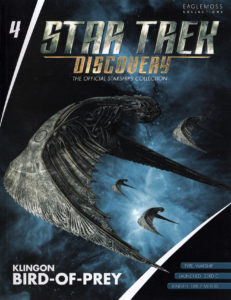 The Bird-of-Prey was one of the best-known vessels used by the Klingon Empire across the 22nd and 23rd centuries. The mid-23rd-century iteration was a relatively small warship (though larger classes may have existed) that had a similar avian design to other Klingon Birds-of-Prey.

The Bird-of-Prey played a significant role in the Battle of Binary Stars of 2256, the first battle of the Federation-Klingon War. The highly detailed die-cast Klingon Bird-of-Prey Starship is 14cm long and based directly on the original VFX models created for the show. It comes complete with a magazine that profiles the ship and explores the inside story of how it was made.

Get the Star Trek Discovery Klingon Bird-of-Prey Starship and make the Empire Glorious Again, great for any fan of the show.