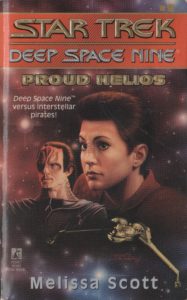 The free flow of traffic to the Gamma Quadrant is vital to the recovery and survival of the planet Bajor and to Federation interests as well. When a mysterious cloaked ship begins raiding wormhole shipping, cleaning out holds and killing entire crews, Commander Benjamin Sisko of Deep Space Nine acts at once to stop the menace.

Commander Sisko has unexpected aid: the cloaked vessel has been striking Cardassian ships as well, and the Cardassian commander Gul Dukat intends to destroy the ship at all costs. Their unlikely alliance works well — until two of Sisko’s crewmen are captured by the raiders. Gul Dukat will stop at nothing to gain his victory; now Sisko must locate the predator ship, hold off the Cardassians long enough to rescue his people — and prevent an interstellar war!