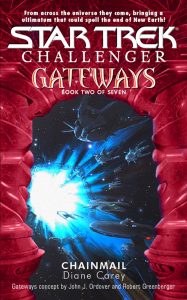 Scattered through the galaxy are Gateways capable of transporting matter and energy across unfathomable distances. Their rediscovered secrets could change the future of space travel forever…the trouble is that noone knows what waits on the other side. Abandoned remnants of an extinct interstellar civilisation, the Gateways connect the Alpha Quadrant with the farthest reaches of the galaxy. Their rediscovery could revolutionise space travel…but it could also open the door to who knows what dangers from the other side. Twenty years ago, in the space near the planet of Belle Terre, a caravan of alien vessels disappeared into a gigantic Gate. Now the descendants of those aliens have returned, armed with incredible new weapons and abilities. Commander Nick Keller of the USS Challenger, already struggling to maintain peace in a volatile sector of space, is all that stands in the path of a fleet of invaders driven by a hostile — and fanatical — agenda. Diane Carey revisits the ship and crew she created for Challenger, the final volume of the Original Series six-part New Earth sequence, in which Keller and the USS Challenger’s crew took over the guardianship of the new colony of Belle Terre from Captain Kirk and the USS Enterprise. Now Keller finds himself defending not just a farflung colony of terrestrial pioneers but the security of half the known galaxy itself.