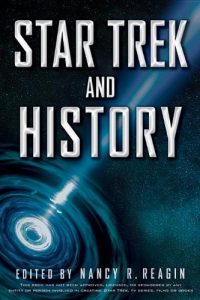 For a series set in our future, Star Trek revisits the past constantly. Kirk and Spock battle Nazis, Roman gladiators, and witness the Great Depression. When they’re not doubling back on their own earlier timelines, the crew uses the holodeck to spend time in the American Old West or Victorian England. Alien races have their own complex and fascinating histories, too.

The Star Trek universe is a sci-fi imagining of a future world that is rooted in our own human history. Gene Roddenberry created a television show with a new world and new rules in order to comment on social and political issues of the 1960s, from the Vietnam War and race relations to the war on terror and women’s rights. Later Star Trek series and films also grapple with the issues of their own decades: HIV, ecological threats, the collapse of the Soviet Union, and terrorism.

How did Uhura spur real-life gender and racial change in the 1960s? Is Kirk inextricably linked with the mythical Old West? What history do the Klingons share with the Soviet Union? Can Nazi Germany shed light on the history and culture of the Cardassians? Star Trek and History explains how the holodeck is as much a source for entertainment as it is a historical teaching tool, how much of the technology we enjoy today had its conceptual roots in Star Trek, and how by looking at Norse mythology we can find our very own Q.

Features an exclusive interview with Nichelle Nichols, the actress behind the original Lt. Uhura, conducted at the National Air and Space Museum
Explains the historical inspiration behind many of the show’s alien races and storylines
Covers topics ranging from how stellar cartography dates back to Ancient Rome, Greece, and Babylonia to how our “”Great Books”” of western literature continue to be an important influence to Star Trek’s characters of the future
Includes a timeline comparing the stardates of Star Trek’s timeline to our own real world history

Filled with fascinating historical comparisons, Star Trek and History is an essential companion for every Star Trek fan.