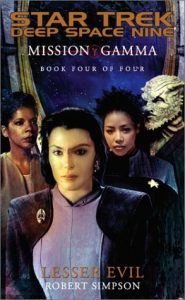 A four-book odyssey of space exploration, political intrigue, religious schism, deadly conspiracies and startling revelations, this is Deep Space Nine at its best. Following the shocking death of a recurring Deep Space Nine character from the television series, the space station erupts into chaos as a tenuous political alliance — established at great cost after years of bitter conflict — unravels in the midst of the hunt for the killer. Elsewhere, the commander of the Starship Defiant faces the ghosts of his past as he makes a dangerous attempt to set right the tragedy that years ago cost him the love of his life.