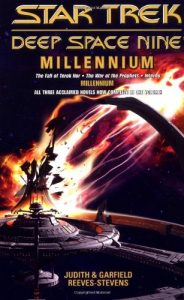 In the midst of the Dominion War, the stage is set for a final apocalyptic confrontation between the Prophets and the Pah-Wraiths: immeasurably powerful alien entities that exist outside of linear time. Bajor is in falmes. The corridors of Terok Nor echo with the sound of battle. It is the end of the Cardassian Occupation — and the beginning of the greatest epic adventure in the annals of Deep Space Nine. Six years later a secret which has remained hidden since the Cardassian withdrawal is revealed for the first time and Captain Benjamin Sisko must face the most dangerous challenge of his career: unless he can gain the secret of the fabled lost Orb of the Prophets, what began with the fall of Terok Nor will end with the destruction of Deep Space Nine — or worse. Plunged into a nightmare in which the Pah-wraiths have triumphed and linear time no longer exists, Sisko and his crew have one slim chance to avert a cosmic disaster. They must return to Deep Space Nine — but when? On the day of the Cardassian withdrawal from Terok Nor, or on the day, six years later, when Deep Space Nine was destroyed? Which choice will lead to the triumph of the Prophets, and which to eternal victory for the Pah-wraiths? For Sisko to change the past and restore the present, he must be prepared to make the final sacrifice: his future…The three volumes which make up the Millennium Omnibus are Book One: The Fall of Terok Nor, Book Two: War of the Prophets and Book Three: Inferno.