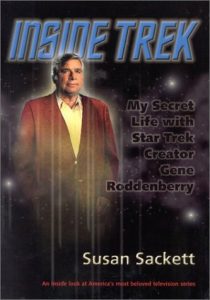 Inside Trek is an unauthorized, behind-the-scenes look at one of television’s most beloved series, filled with never before told stories about the cast, the writers, and most importantly, Star Trek creator Gene Roddenberry. For over 17 years, Susan Sackett was Roddenberry’s executive assistant — and secret lover. Sackett presents the first true portrait of Star Trek’s creator, the first biography written by someone who actually knew him well. She reveals his philosophies, his struggles, his successes and failures, and the path of self-destruction that would ultimately cause his untimely death. Told lovingly, yet with complete candor, this memoir will take you where no one has gone before!