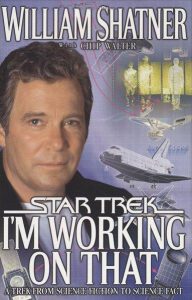 William Shatner — Captain Kirk himself — explores how the imagination of Star Trek is reflected in the cutting-edge science of today. Over five decades, Star Trek’s celebration of mankind’s technical achievements and positive view of the future have earned it an enduring place in our global culture. Its scientific vision has also had a profound effect on the past thirty years of technological breakthroughs. Join William Shatner, the original captain of the Starship Enterprise, as he reveals how Star Trek has influenced and inspired some of our greatest scientific minds — the people behind the future we will all share. In interviews with dozens of scientists we learn about the inventions that will revolutionise our lives and the discoveries that will make it truly possible to explore the last great frontier — space. As one Nobel Laureate commented on being shown a wood and plastic model of the engine core from a Star Trek: The Next Generation starship: “I’m working on that.” From the technicalities of warp speed to real-life replicators to the likelihood of our being able to beam across continents, this always-informative book takes us on a fascinating and eye-opening voyage to the realms of the possible and probable.