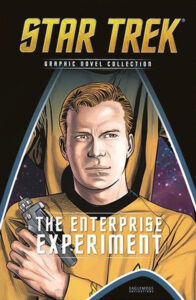 Dorothy “D.C.” Fontana, the writer from the original Star Trek TV series, as well as The Animated Series, The Next Generation, and Deep Space Nine, is joined by partner Derek Chester (Star Trek: Legacy) for The Enterprise Experiment, an all-new series set in the unexplored fourth year of the U.S.S. Enterprise’s legendary five-year mission. The Enterprise Experiment is a sequel to the classic episode “The Enterprise Incident” – originally written by Fontana herself – where Kirk and Spock found themselves trapped on an Enterprise out of phase with space itself and facing a plot of revenge from the Romulans!