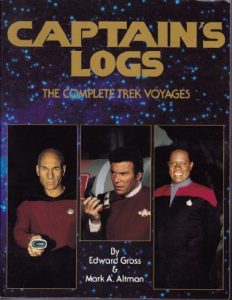 Your complete guide to the 23rd and 24th centuries… Captain’s Logs, the ultimate Trek guidebook from classic to Deep Space

Never before could you find the 23rd and 24th centuries under one cover. For the first time in one volume a complete episode guide from Classic Trek’s “The Man Trap” to Deep Space’s “Emissary,” brought to you by Edward Gross and Mark A. Altman who USA Today referred to as the leading authority on Trek.

You’ll find copious information and trivia regarding every episode from the creators themselves in their own words. Explore the voyages of the Trek casts through television, the movies, the Next Generation, and the crew manning the space station on the deepest fringes of the final frontier. Featuring the animated series and the mysterious lost voyages, which include the controversial prequel, Starfleet Academy, and the last episode Gene Roddenberry ever wrote, “Ferengi Gold.”

This is the complete Trek saga in one invaluable log book.