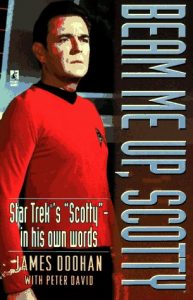 Montgomery Scott, the endlessly resourceful chief engineer of the “Starship Enterprise” TM, has been a familiar presence in our collective imagination for over three decades. All around the world, everyone knows “Scotty” — but far fewer know the true story of actor James Doohan, who has brought Starfleet’s legendary “miracle worker” to life for three seasons on television and in seven major motion pictures. Here at last are all the colorful details of Doohan’s life and times, including: How war hero Jimmy Doohan charged the beach at Normandy on D-Day, and how World War II left its mark on him forever. How Doohan landed the part of Scotty on the classic “Star Trek” television series, and how the character acquired an accent. Memories of William Shatner, Leonard Nimoy, and all of the original crew of the “U.S.S. Enterprise” TM, and the feuds and friendships that formed among them. How Doohan made his peace with “Star Trek: The Next Generation” — and brought Scotty back to television for one very special episode. The long and affectionate bond between Doohan and generations of Trek fans — and how “Star Trek” brought true love into Doohan’s life. “Beam Me Up, Scotty” is an entertaining and indispensable look at the unforgettable personality behind one of the twentieth century’s most enduring icons.