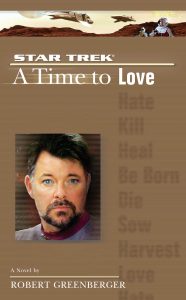 A century ago the long-running conflict between two alien civilizations ended when both of them colonised the same distant planet, becoming instead a shining example of inter-species cooperation and coexistence. Now an investigation headed by Kyle Riker — estranged father of Commander William Riker — has revealed how fragile their hard-won paradise is. Within a few generations, a virus indigenous to their colony planet of Delta Sigma IV will wipe out all its inhabitants. Faced with this threat the delicate shell of harmony starts to crumble…Jean-Luc Picard and his crew, still reeling from the events which have tarnished the career of one of Starfleet’s most decorated captains, must come to the aid of a world which once knew only peace, but now faces violence and chaos. Riker, meantime, must face the fact that his own father may be responsible for the anarchy into which Delta Sigma IV is descending.