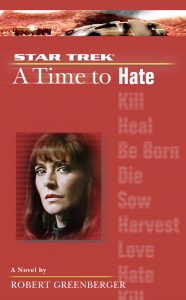 On the cusp of their epic battle with Shinzon, many of Captain Jean-Luc Picard’s long-time crew were heading for new assignments and new challenges. Among the changes were William Riker’s promotion to captain and his new command, Riker’s marriage to Counselor Deanna Troi, and Dr. Beverly Crusher’s new career at Starfleet Medical. But the story of what set them on a path away from the “Starship Enterprise(TM) ” has never been told. UNTIL NOW. The recurring blood feuds between the Bader and the Dorset ended mysteriously a century ago when both races colonized the planet Delta Sigma IV. But, unknown until now, it was a reaction to a naturally occurring gas that led to their harmonious existence…a reaction that would eventually mean certain death for the planet’s inhabitants. What the “Enterprise” crew believed was a cure for the population — a treatment introduced into Delta Sigma IV’s environment by Kyle Riker, a man at odds with his son, Commander William Riker — has instead triggered worldwide carnage, as long-suppressed aggression and hostility are suddenly and violently unleashed. Caught in a world on the brink of self-destruction, Captain Picard — a man still waging his own personal battle for redemption in the eyes of his commanding officers — must somehow find a way to resolve this catastrophic event and save his crew, even as the implications of his actions may ultimately doom an entire race….