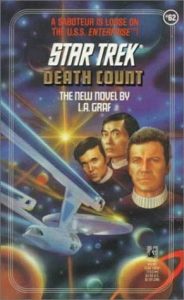 The disappearance of Andorian scientific genius Muav Haslev fuels tensions between the Orions and Andorians — tensions that come dangerously close to full scale war. Captain Kirk and the crew of the U.S.S. Enterprise are called to Starbase Sigma 1, located on the edge of Andorian-Orion space, to patrol the sector as a deterrent to hostilities.

On arrival, the crew encounters an inexplicable series of events, beginning with missing equipment and shipboard malfunctions. After a deadly transporter accident, Kirk suspects sabotage — suspicions that are confirmed by the mysterious murders of three Federation officials. Now, Kirk and crew must put together the fragmented pieces of the puzzle, before the Starship Enterprise faces destruction and the galaxy faces interplanetary war.