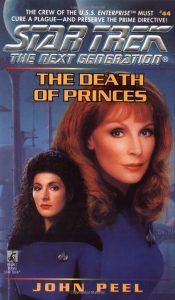 Dangerous assignments come in pairs when Captain Picard and his crew are confronted with two desperate missions on two different worlds.

On the planet Buran, newly linked to the Fedration, a mysterious disease devastates the population-and turns them against the visitors from the U.S.S. Enterprise. Meanwhile, on nearby lomides, a renegade Federation observer has disappeared, intent on violating the Prime Directive by preventing a tragic political assassination.

While Dr. Crusher struggles to find a cure for the plague ravaging Buran, Commander Will RIker leads an Away Team to lomides. Their forces divided, Picard and his crew find themselves the only hope of two worlds.