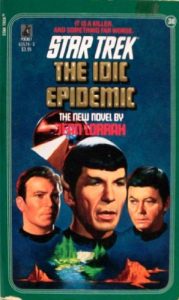 The Idic Epidemic I.D.I.C — Infinite Diversity in Infinite Combination. More than just a simple credo, for those of the planet Vulcan it is the cornerstone of their philosophy. Now, on the Vulcan Science Colony Nisus, that credo of tolerance is being being put to its sternest test. For here, on a planet where Vulcan, human, Klingon, and countless other races live and work side by side, a deadly plague whose origins has sprung up. Aplague whose origins are somehow rooted in the concept of I.D.I.C. itself. A plague that threatens to tear down that centuries-old maxim and replace it with an even older concept. Intersellar War