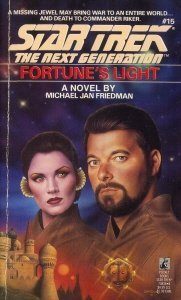 Dante Maxima Seven — a world known to its inhabitants as Imprima. A world where Madragi — huge social/economic entities wealthy beyond compare — control the fate of millions..

Years ago, William Riker was part of the Starfleet delegation that opened Imprima to the Federation. Now the disappearance of an old friend — Teller Conlon, who also served on that team — draws Riker and the Enterprise across the galaxy, back to Imprima.

Because the jewel known as Fortune’s Light — one of Madraga Criathis’s most priceless possessions — has been stolen. And Teller Conlon stands accused of its theft. Now Riker must discover the truth behind the disappearance of both his friend and Fortune’s Light, no easy task on a world where treachery and intrigue are commonplace…and where even an old friend’s embrace may conceal the deadly bite of a dagger’s blade.