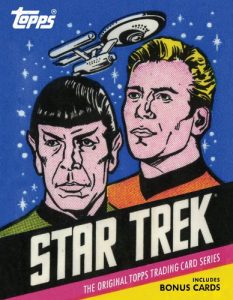 Ever since Star Trek first aired on television in 1966, the series has had a strong influence on pop culture. In 1976, due to the show’s rising popularity in syndication, Topps released a series of collectible trading cards featuring full-color images from the classic television series created by Gene Roddenberry, as well as synopses and information on the cast and crew of the Starship Enterprise. This first-ever compilation includes the fronts and backs of all 88 cards and 22 rare and hard-to-find stickers (which were originally sold one per pack), as well as text and commentary by Star Trek insiders Paula M. Block and Terry J. Erdmann—guaranteed to please the die-hard Trekkie as well as a whole new generation of fans.