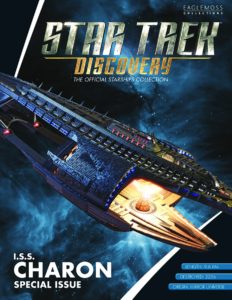 Embark on an adventure in the Mirror Universe with this city-sized I.S.S. Charon that is a symbol of power and might of the Terran Empire Starfleet and our Star Trek Discovery Official Starship Collection!

I.S.S. Charon was a vast starship and the palace of Emperor Philipa Georgiou in the Mirror Universe. But it was not only a palace but a prison as well for the enemies of the Empire and it could accommodate a number of smaller vessels in its hangars. Sun-like super-mycelial reactor was powering the entire ship from the open core of the starship. John Eaves designed the ship to combine the technology of countless conquered races and to destroy planets.

This super-sized Star Trek die-cast I.S.S. Charon Special Edition recreates the massive starship as seen in the first season of Star Trek: Discovery. Measuring approximately 13.2 inches long, the sun-like reactor includes an internal light to bring the model to life as seen in the series. It comes with an exclusive collector’s magazine featuring a full profile of the powerful starship, original production art and details of its design evolution.