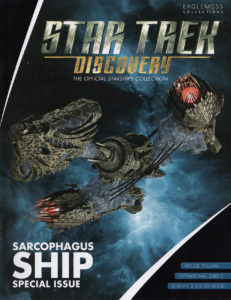 The Klingon Sarcophagus ship – or Ship of the Dead – was the flagship of the once mighty House of T’Kuvma. In the 23rd century, it was left as nothing more than a derelict wreck following the house’s fall from honor. But in 2256, the restore Sarcophagus ship played a key role in the Battle at the Binary Stars, marking the beginning of a war between the Klingon Empire and the Federation. The Sarcophagus ship was named for the way it honored Klingon dead – its hull was adorned with sacred caskets containing the remains of fallen warriors. These caskets were placed on the hull to form an ornate armored surface, the dead forming an extra layer of protection from attack.

This super-sized Sarcophagus Special Edition ship measures approximately 12 inches long! It is die-cast and hand-painted with intricate detail using references from CBS Studios’s own archives of designs and CG models. It comes with its own display stand and an exclusive collector’s magazine featuring a full profile of the starship.