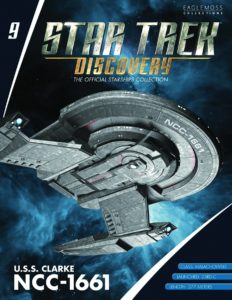 The U.S.S. Clarke NCC-1661 is a Malachowski-class Federation starship that was operated by Starfleet. In the Battle of the Binary Stars in 2256, it was destroyed in battle against a Klingon fleet. A display of U.S.S. Clarke can be seen in the mess hall of the U.S.S. Discovery.

The U.S.S. Clarke starship is die-cast and hand-painted with intricate detail using references from CBS Studios’s own archives of designs and CG models. It comes with its own display stand and an exclusive collector’s magazine featuring a full profile of the starship.