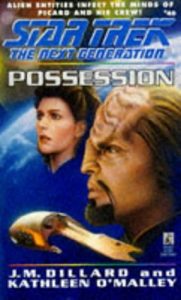 Eighty years ago, bodiless alien entities brought a plague of violence and bloodshed to the planet Vulcan. The terror was ended only when the entities were trapped in special containers and walled away behind forcefields. But now, some greedy Ferengi have opened the containers, releasing the rapacious entities to possess the bodies of the Enterprise crew. No one can be trusted — anyone could be host to one of the alien things — and Captain Picard must devise a way to defeat the entities before they spread throughout the Federation.