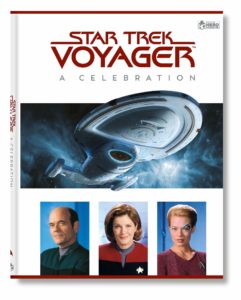 Celebrating the 25th anniversary of the TV series in 2020! Everything you want to know about Captain Kathryn Janeway’s Starship Voyager and crew.

STAR TREK: VOYAGER first appeared on TV on 16 January 1995, running for 172 episodes over seven seasons. Charting the adventures of the 24th Century Starfleet Vessel U.S.S. Voyager, this multi award-winning series followed the starship and its crew to the distant side of the galaxy. Celebrating 25 years since its first broadcast episode, this book explores the very best of STAR TREK: VOYAGER, with chapters looking at the greatest episodes, alien characters, visual effects, hair and makeup, costumes and guest stars. Plus the actors talk of their memories of the show, and recall their personal highlights over its six-and-a-half year run.