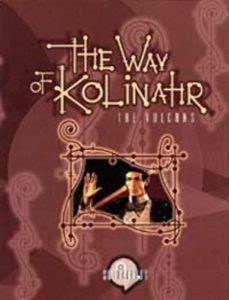 Vulcan. Hot, volcanic, unforgiving. Home to one of the pillars of the United Federation of Planets – the Vulcan people. From the Fire Plains to the provinces of Kir and Raal, join us on a tour of this ancient and fascinating world. Climb into the foothills below Mount Seleya or walk the streets of Vulcana Regar. Buy a Vulcan lute in the Grand Bazaar of ShirKahr or sample some plomeek soup from a street vendor’s cart in far-off Ta’vistar. When you are ready, prepare to begin your training for the most arduous personal journey of all – the attainment of the fabled Kolinahr discipline – as you attempt to banish all emotion.

The Way of Kolinahr includes detailed information on Vulcan history, society and culture, providing the most comprehensive look to date at this fascinating world and its people. Play a Vulcan ambassador or a Vulcan Master of the Jarok Sect of logic. Debate the finer points of multi-phasic particles at the Vulcan Science Institute. Wrestle a sehlat in the hills above Rammat. Learn to use the lirpa and ahn-woon at the Vulcan Institute of Defensive Arts. The splendors of the planet Vulcan await you.

The Way of Kolinahr opens up a multitude of new opportunities for ST: TNG RPG players and Narrators alike. An indispensable resource on the planet Vulcan and its people, The Way of Kolinahr provides all the tools necessary to design and run entire Vulcan episodes and series. It includes: